On a typical night in Dan O Connell’s Bar Johnny O Leary would play in session before the dancers would arrive , in this period 1974 to 1976 Mikey Duggan and Francie Davey O Connor from Scartaglin would often sit in with him along with his daughter Ellen. Sonny McSweeney was from Leam and is featured in the famous photo outside the Listowel Arms with Denis Murphy ,Willie Clancy ,Pàdraig O Keeffe .

He was a pupil of Pàdraig O Keeffe we are told but had a lot of Tom Billy tunes so maybe taught by Tom Billy also. He died in 1977, a year after these recordings.

Decades ago I was to be seen cycling around the Sliabh Luacra area with fiddle and tape recorder “Hello, I was wondering if you would be interested in having some recorded music I made back in the 1970s of a number of musicians in the Sliabh Luachra area, or put me in touch with someone who would.”

Back then I was learning the fiddle, was living in England, and having found ‘The Star Above the Garter’ LP, decided that THAT was the style of music and tunes to wanted to learn. Spending my annual leave from 1974 to 1977 cycling round the area with my Sony tape recorder and fiddle on my back, and camping gear on my bike calling in on the ordinary folk hoping to get another tune or two. I relied on Dan Connell ( need I say more?!) to act as guide – he let me camp in his pub garden once or twice! – and would sometimes drive me to some far spot to listen to another musician. Johnny O’ Leary became a good pal of mine (what a generous, kind man he was!)
and we’d meet up at Dan’s of an early evening to pass on tunes to me before enough folk had come in to form a Kerry Set at which point Dan would push the tables back and off we’d go. I felt so honoured to be accepted to play along.

Anyway the point of this rambling email is to see if you would like a copy of the recordings I’ve made – there are several hours worth – not only of the quiet sessions in Dan’s but also some (louder!) pub sessions with
Johnny, Julia and others at various Fleadhs – Scartaglen, Listowel, I think it would be a shame if this snapshot of Sliabh Luachra music of decades ago should be lost – hence this email in the hopes someone might find the
recordings of interest.

If you are interested I would be happy to take this further. I owe a lot to the folk of Sliabh Luachra. I would like to repay their friendship and encouragement they gave me all those years ago.

I hope you find the above of interest and I look forward to possibly hearing
something from you.
Regards,
Patrick Slattery

Scartaglin is a small rural Kerry village full of culture and traditions. It nestles on a small hill half way between Castleisland and Ballydesmond and lies within the famous Sliabh Luachra region of Kerry. 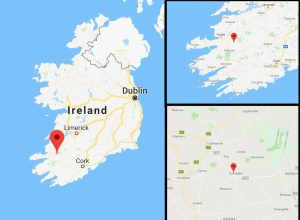